Of course, this is a follow-up post on my previous follow-up post on lazy evaluation. One commenter (Michael—I believe I know this Michael) of that post pointed out the function makeActiveBinding() in base R. I have almost forgotten it. It was once the most magical function in my eyes, and was the foundation of one of my only two academic papers, “Reactive Programming for Interactive Graphics” (Xie et al 2014). 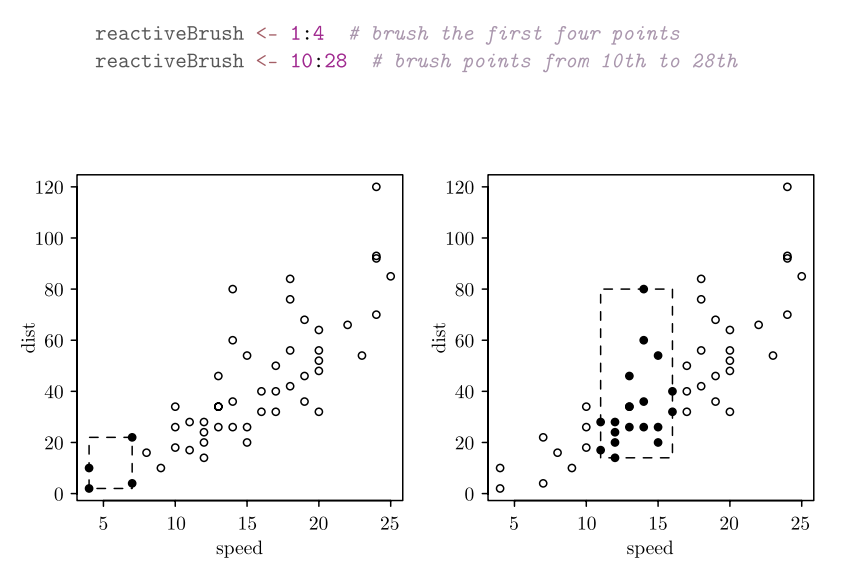 That may be difficult to understand if you have just heard of this function for the first time. Let me give an example by rewriting the “sword” sound effect I used in my useR! 2014 talk (a few of you might still remember that):

A toy implementation of Shiny

Active bindings can be a lot of fun to play with, simply because a function is executed no matter if you try to obtain or set the value of an object. When you have a function, you have the full control of the world. I have shown an example of brushing a scatterplot in the paper I mentioned in the beginning of this post. Next I’m going to show a super naive implementation of Shiny based on active bindings.

Then we provide a couple of output elements. One uses the value input$slider, and one does not.

Finally, we generate all outputs to build the dependency table.

Imagine you are dragging a “slider” to modify its value (we just directly assign values to the “slider” below):

So the above “Shiny” system written in 40 lines of code actually works. The real Shiny framework is certainly far more complicated than that (thousands of lines of R and JS code), but the toy implementation has shown the possibility of automatically executing a function (mostly for side-effects) when you modify an object.

The reason that Michael pointed out makeActiveBinding() was because Baptiste Auguie wanted a shortcut for system('open .'). Here is how you could do it:

Then when you type open in the R console, your current working directory should be opened in your file viewer. This example only works on macOS. For other OSes, you need other commands (perhaps xdg-open for Linux, and shell.exec() for Windows).

The object can be viewed as an alias of a function, in which you can run arbitrary commands. The only advantage of using active bindings in this case is that it saves you a pair of parentheses, because typically you would define a function instead: open = function() system('open .'), and call open(). Perhaps being cool is also an advantage.

Appendix: choose a type of pizza

Colin Fay wrote a blog post on active bindings (and pizza) last year, which I believe is a much better tutorial than my post here. I recommend you to read that post, too.