Update on 2018-07-01: I have changed the scope of the repository https://macos.rbind.io. Please ignore the post below, and see this post instead.

One of the open source projects is not like the others. The project is called Homebrew. In my eyes, it is the most successful open source project in history in several aspects. I saw an interesting graph on Twitter a few days ago, which perfectly characterized the amazing community nature of Homebrew: 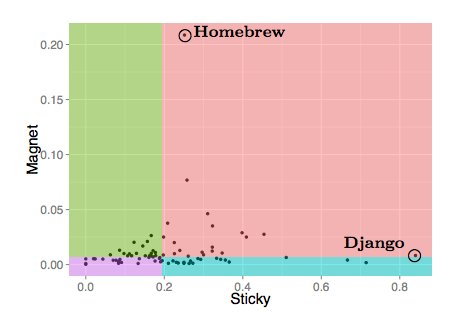 Personally I don’t really care about if a project is “sticky”, and I believe being magnetic is a lot more difficult and valuable than being sticky for an open source project. Okay, that is a little bit digression for this blog post.

Do I need to repeat the merits of Homebrew? The key is automation. In most cases, you can install a system software package with one command, and it does not require sudo. Compare this with the traditional way of installing software on macOS: how many mouse clicks does it take for you to find, download, open, and install a package? No matter how inconvenient it was the last time you installed a package, the next time you will have to go through the painful process again if you want to upgrade a package. Worse, if you want to uninstall a package installed from a *.pkg installer, sometimes you may want to kill yourself, and Windows users will be able to laugh out loud at you, since it is so awkward to cleanly uninstall a package on macOS.

Isn’t Homebrew just apt(-get) on Debian/Ubuntu or yum on CentOS? Well, I believe Homebrew did one thing absolutely correctly: it does not require sudo (and everything is written to /usr/local). This is important and a perfect decision for personal computer users. Yes, sudo makes perfect sense for a system with multiple users (e.g., a Linux server), but I really don’t like it in the case of a single user installing software on his/her own computer. Requiring sudo also makes me nervous: What exactly will the installer do? Does it write to /usr or /opt or elsewhere? I have no idea. I’m just a dumb user of my own computer. I don’t want to be a sysadmin, and I don’t want to touch the directories to which I don’t have write permission without inputting my password. If I touch them, I’m likely to forget what I did someday.

Thanks to many contributors to the R formula in Homebrew, it is easy to install a pre-built binary package of R:

For developers, you may also want TeXinfo (for R CMD check) and XQuartz (for R packages like rgl):

Actually, installing R packages from source may not be as bad as you thought. About 75% packages on CRAN do not need compilation, which means they are pure R packages, without C/C++/Fortran code. These packages can be easy and fast to install from source.

For the rest of 25%, most don’t require external system dependencies, so your Hombrew version of R should be able to compile them (you have Clang, and also gfortran from Homebrew’s gcc formula). The only problem is some packages take long time to compile (e.g., stringi), so we may want to prebuild the binaries for them.

The trickiest packages are those with (heavy) system dependencies, such as RGtk2, cairoDevice, and rJava. They are not too bad, either, because their dependencies typically exist as Homebrew formulas, e.g., you can brew install gtk+ for RGtk2. The problems are: 1) you need to know the names of the formulas (you may look it up in the r-hub/sysreqsdb repo), and 2) the R packages may also take a long time to compile.

With the above background information, the problem of “the missing CRAN repository of binary R packages for the Homebrew R” is actually not too bad. We may not really need to build 12,000 binary R packages. Perhaps building only the top 30 trickiest and also frequently used R packages is enough for most R users on macOS.

I have been hoping to experiment with this for a couple of years. Finally I finished the R Markdown book, which pretty much swallowed the first half of my 2018. Then I got a short break mainly because I started to run the reverse dependency check for the rmarkdown package. To those who are not R package developers, this basically means I have to run R CMD check on more than 2000 reverse dependencies of rmarkdown. This usually takes a couple of days. Every time I do this task, I need to figure out how to install a few tricky R packages (same pain comes when I check the knitr package).

This time I just gave up and decided to take a stab at building some binary R packages against the Homebrew version of R, so that I won’t need to worry about installing them again in the future. I used the osx environment for the first time on Travis, built some packages on Travis, and automatically deployed to https://macos.rbind.io. So far so good, although I have to admit I’m definitely not an expert in compiling packages from source. I just have some bare minimum knowledge.

Currently the scripts for building the packages are in the Github repo yihui/homebrew-r-packages (I may move it to a certain organization in the future if a wider community shows interest in it). The main script is build.R, which I believe is not too complicated.

See https://macos.rbind.io for detailed instructions on how to install these pre-built binary packages, as well as things that I need help with. You have been warned that this is only a quick experiment of mine over two days. Trust me: I’m not an expert, I’m not an expert, and I’m not an expert (e.g., OpenMP? What’s that?)! I’ll be waiting for experts’ feedback and help!

In January this year, I wrote down some notes on how to install RGtk2 on macOS. I’m delighted to say that the post is obsolete now. All you need is:

No more hacking at the gtk+ formula in Homebrew!